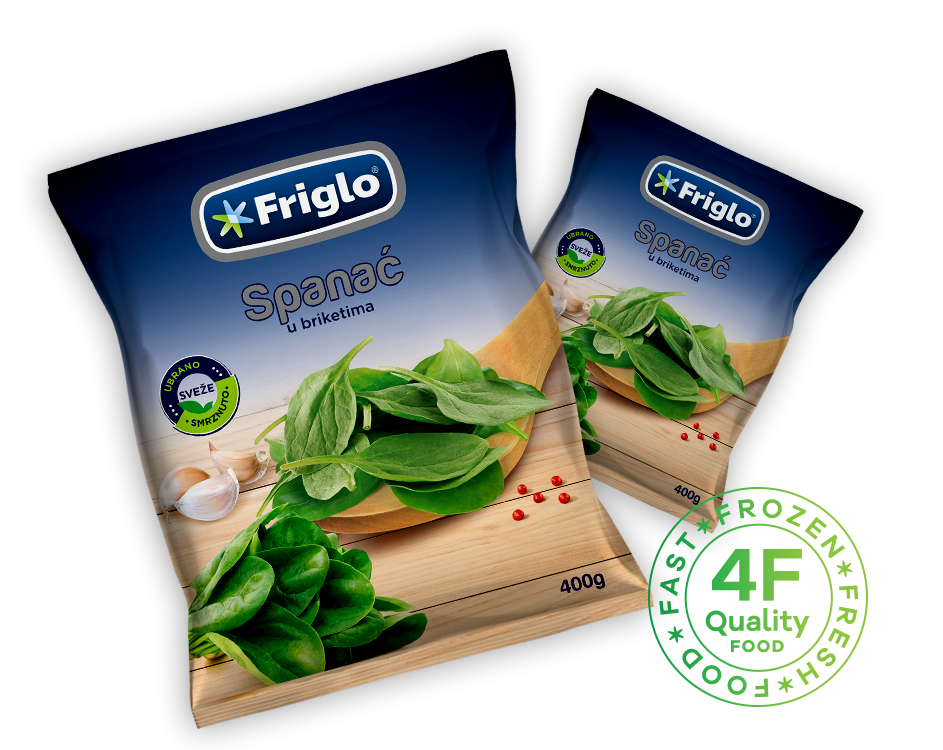 Quick frozen.
Ready for use without thawing.

Average nutritional value per 100 g of the product

Once thawed, the product should not be frozen again.

Spinach is frequently called a superfood since it is a sheer wealth of nutrients combined with a low-calorie value. Its dark leaves contain numerous ingredients useful for our skin, hair, and bone health.

Spinach has been used by various cultures throughout history, notably in the Mediterranean, Middle-Eastern, and South-East-Asian cuisines. This is no wonder since this leafy vegetable can be incorporated quite easily into any diet, as it is cheap and easy to prepare. It was brought to Europe in the 11th century by the Moors during their siege of Spain, after which it entered the territory of the USA as well.

This vegetable is a source of vitamins like folate, niacin, vitamin A, vitamin B6, vitamin C, vitamin K, and contains traces of the rest of the essential vitamins. Other important elements, including thiamine and riboflavin, which are used in various reactions in our body, are also found in spinach. Spinach is also rich in pigments like beta-carotene, lutein, xanthene, and chlorophyllin. It is interesting that this vegetable is also a good source of proteins, which is very useful to people on a special dietary regime, such as vegetarians and vegans.

Sauté the thawed spinach on butter while mixing. Add spices, garlic and pour some milk. Sauté the spinach at moderate temperature until it reaches a desired thickness.